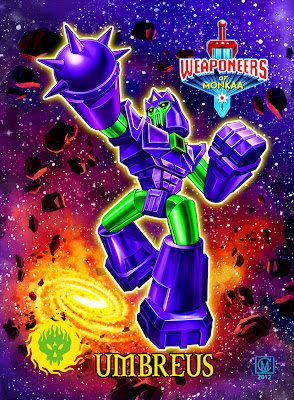 UMBREUS
Evil Overlord of The Vilhain
"The power of Monkaa is rightfully mine! Doom to all who stand in my way!"

Umbreus, first born of Shadow and Light. Forged in an attempt to bring
peace and balance to the universe. That attempt failed tragically.

Impatient to gain the crown of Monkaa, Umbreus murdered the Lord of Light
and cast a powerful spell upon the Mistress of Shadow. With the aid of
mighty Brutok and The Vilhain, he seized the throne.

Terribly scarred in battle and driven from the capitol, he now wears a
frightening helmet and has gone mad for power. He has vowed to conquer his
brother Empyreus and take back what he believes to be rightfully his. 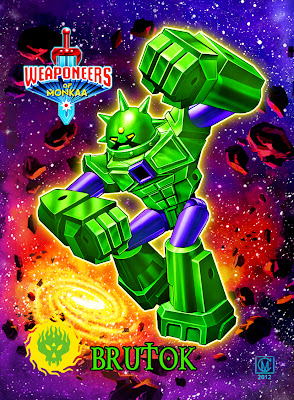 BRUTOK
Ruthless General of The Vilhain Hordes
"Want! Take! Have! Only laws Brutok live by!"

Brutok is a physically powerful  Monkaarian. With his lumbering size and
broken speech many take him for a simple being. That mistake is deadly. He
is the most cunning and brutal strategist to ever stride into battle.

Brutok loyally served the Mistress of Shadow. True love for her is why he
continues to follow Umbreus. Brutok hopes to gain the knowledge to set his
Mistress free and prove his love. Until then, he is content to wage war
upon The Gearo. He relishes his battles with Palidar, the only being he
feels is his equal on the battlefield. 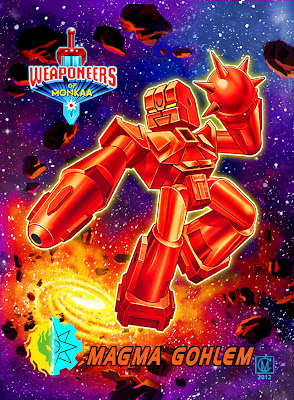 The Gohlem are elemental protoforms of Monkaa. Every citizen, soldier,
warrior, forgemage, seer, every Weaponeer begins its life path as a Gohlem.
Once their journey begins and their will starts to form each individual has
a choice. Will they follow the path of The Gearo or The Vilhain.

The Magma Gohlem begin in the depths of the volcanic fire pits of Monkaa.
As their life paths unfold most Magma Gohlem choose the path of forgesmith
or warrior. Unfortunately many that walk the path of the warrior side with
The Vilhain.